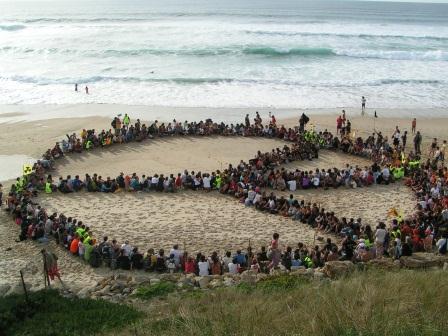 Symbols are the language of the imagination.

Their power lays in the ability to transcend the limitations of reason, communicating directly with the subconscious.

Thinking about it, we should hardly be surprised by the power of symbols. You don’t need to be a student of mythology or history to understand their effect.

As the subliminal power that symbols can wield is often enormous, historically they’ve not always been well used. Think of the hysteria of the Nazis, who relied on a peculiar brand of mythic interpretation and the very deliberate, effective and perverse use of symbol and ritual.

Advertisers use symbols every day to try to transform our energy – prompting action to buy their products. The logical connection between cowboys and cigarettes, and half-naked women and beer is rationally dubious, but the power of these images cannot be disputed.

Today, the power of symbol is not wielded by its traditional keepers (in religion and art), but by the advertising world, spin doctors and political image-makers. Hollywood, commercial TV, MTV and the recording industry all tap into the deep pool of symbolism to convey their message by means other than words and language.

Through the centuries, religion and art used the power of symbol as an end in itself for the transformation of consciousness, to uplift and awaken. Today their influence is minimal.

Instead image makers, politicians and dictators use the power of symbol as a means to gain and maintain control; and commercialists use it to sell products.

How do you feel about the use of symbols for means other than as a visual language?