Batman Branding for Remarkable NFPs – Part 2: Know What’s at Risk for Your Customers 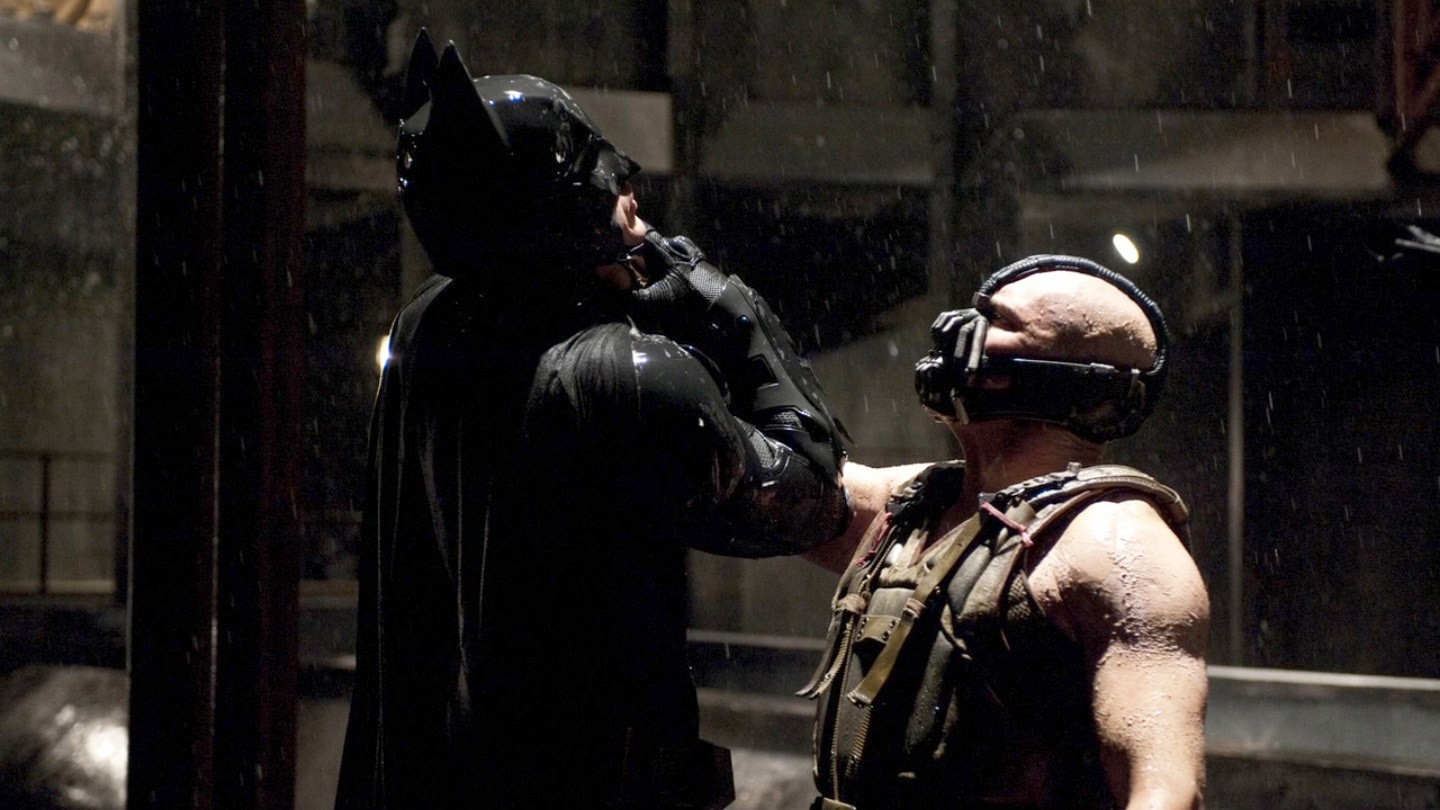 Heroes and villains. Batman and Bane. On the bell curve of all people, they’re the outliers, the extremes. Which one is your NFP? Most people would say the former… but how were the people of Gotham inspired? Who gave them the right story and reason – the one that changed them from bystanders to participants?

The second of three articles explains the different ways Batman and Bane evoked the people of Gotham City and how, for your NFP to do the same, you need to ask-and-answer four questions…

Are heroes born or made? Both.

In the case of Batman, he was made from the tragedy of his childhood. Just an ordinary person, who in a time of crisis, was inspired to rise up and become a reluctant hero. And there’s been others, at other times, for other reasons.

But there’s also those who’ve fought the hard battle and then realised… they’re on the wrong side. They’ve mistakenly believed the wrong person, because they told a better story. The people of Gotham did exactly that – when they believed the villain Bane, over Batman.

For much of the movie, The Dark Knight Rises, Batman is beaten. After taking the blame for the death of Harvey Dent, he’d disappeared. His believers, for the most part, had abandoned him. And other villains, in particular Bane, came close to destroying his legacy. Instead, the people of Gotham City came to believe a different story, Bane’s story, which spoke directly to their emotions. Bane’s story inspired them to do the unthinkable, and take a stand.

Isn’t that exactly what you want your NFP to do, for your customers?

Let’s see what this villain can teach us…

Bane knew his audience. To engage the people of Gotham, he exposed the blatant lie about Harvey Dent being a hero and his so called ‘murder’, by Batman. In seeing the deception, the people turned against the city of Gotham, its Police and Batman. And right or wrong, they were inspired to act. Fundamentally, isn’t that what you want – that your audience does something?

“We take Gotham from the corrupt! The rich! The oppressors of generations who have kept you down with myths of opportunity, and we give it back to you… the people. Gotham is yours … Step forward those who would serve … Gotham will survive!

So let’s first ask, do you really know your audience? Who do you serve? Do you feel their pain? Have you immersed yourself in their world – what they’re feeling, thinking, hearing and seeing? Every brand, be it NFP or not, is nothing without its customers. Every action should be customer centric and talk directly to the voices in their head – inspiring them to rally behind you and your cause.

Like Bane, your NFP brand needs to understand its audience. You need to tap into the energy that lays behind them – inspire them to align with you. So here’s the first question you need to ask yourself:

Q1. What is it, in your customers’ world, that’s about to change?

What’s threatened? To ignite them into action, it has to be something that they care about… and something they have the power to affect or fight for (be that to protest, protect, resist, rescue, stop or adopt). Clearly define the issue for them, in ways that speak to their emotions.

The Movember Foundation does this particularly effectively.

The citizens of Gotham City were persuaded by Bane’s story. They felt it spoke to them and their frustrations, and it showed them a way to change. His story inspired them to step up, change their normal behaviour and be counted – becoming the hero of their own fractal story… and part of Gotham City’s larger narrative.

“A hero can be anyone. Even a man doing something as simple and reassuring as putting a coat around a young boy’s shoulders to let him know that the world hadn’t ended.”

Now let’s ask, who’s the hero of your stories? Is it your customers, or have you cast yourself, the NFP, as the saviour? Are you constantly featuring your assets, but forgetting to highlight the benefits your customers can endow on others, through their participation? Do you know the defining moment, idea or story that could inspire them to stand up and help?

Everyone has the capacity to be a small ‘h’ hero, but it takes something special, a spark, to overcome our natural resistance to step into the spotlight. By placing the power to make change, in your customers’ hands, you’re helping them overcome their reluctance. You’re putting them within reach of the better world they’ve dreamt about, as well as taking a step along your own cause related road. So here’s the second question to ask yourself:

Q2. What can they do about it?

For many NFP brands, it’s obvious what your customers can do – donate. But in others, the support they can give or the action they can take, is more personal. Often, that action recasts them in the role of the hero, as someone else’s saviour.

Such is the case for RUOK. 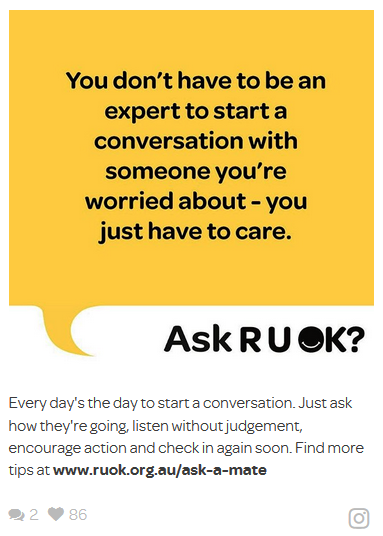 Bane was evil-in-hiding. His pain-inhibiting mask dominated his appearance, so it wasn’t unless you got up-close, that his eyes betrayed his true personality. But the people of Gotham never saw his eyes. They heard his stories from afar and were manipulated to do his bidding, until their true hero, Batman, returned. How did Bane do it? He knew them. Very well. By being of the people and amongst the ordinary, he understood the world of Gotham City, and the concerns of its people.

“Gotham, take control… take control of your city. Behold, the instrument of your liberation! Identify yourself to the world!”

Similarly, truly great NFP brands get insights and inspiration from outside the walls of their organisation.  They know their purpose, who their customer is, what’s happening in their market, the major trends (technical or social) they can leverage and a collection of stories, with real people as the heroes.

And just how do you do all that? Get out and live among the people you serve. Shadow them, observe, listen and be open to change. Then, ask yourself, on their behalf:

There are times, when your NFP needs to be obvious. Almost, blunt. You need to spell out what’s at stake, in danger, will be removed, disappear, or is about to happen. Yes, you are playing on people’s fears, but you should simultaneously show them how they can become heroes, by removing, changing or destroying the threat.

Unicef do this well.

Think we, not me

When Batman finally returned, he knew he wasn’t the centrepiece of Gotham’s story. With the battle won, Bane dead and the nuclear bomb still ticking, he disappears again. But this time, he’s taken the bomb with him. You know that the invisible guardian has sacrificed his own life, to save the city and its people. Right to the end and always in the shadows, Batman made sure the people he fought for, took centre stage. As heroes. That’s the Batman brand difference.

“(Robin) John Blake: I just can’t take it. I mean, nobody will ever know who it was who saved an entire city.

Jim Gordon: They know who it was; it was the Batman.”

Truly great leaders die to themselves. As bestselling author, Jim Collins, famously demonstrated in his book, “Good to Great,” the greatest leaders, are humble. They’re determined, but not selfish. They believe in a cause greater than themselves and serve the organisation or cause they’re a part of – they don’t expect it to serve them.

If you want your NFP to be great, die to yourself. Focus on your customers, and find out the best ending for them, by asking:

Q4. What’s the best outcome for them, and their world?

This is your golden opportunity. It’s your chance to future pace your customers’ lives, by helping them foretell the dream scenario future (a changed world) that they can contribute to, by participating.

In the NFP world, any one of your customers, can become a hero. They just need to participate in your journey, contribute to your dream and believe in change-making.

To do that, you need to know and inspire them, to greatness.

“I’m whatever Gotham needs me to be”

This is Part 2 of a Batman Trilogy, on branding. Part One, covers finding your purpose. The series of articles are designed to evoke reflection on your NFP battle and inspire a rediscovery of the spirit that drives your efforts. For more information on the branding journey of reflection, rediscovery and reinvention, contact the author.