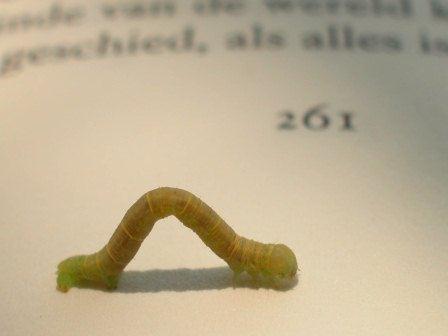 I was sure of it.

It had been days – weeks really – with no movement, change or sign of transformation.

His body was swathed in an unearthly grey fur wrap that had remained motionless for weeks.

You see, lately we gained a new pet – Mr Chub-Chub.

He’s an inchworm. And since his arrival inside the house, he’s gone from Mr Chub-Chub to Mr FAT.

Each day he’s consumed more, practiced his art [eating] and got greener, rounder and … more impressive.

He’s been patient and worked hard.

Hopefully, he was about to become his dream.

But that was two weeks ago.

Brilliant writing is the same as Mr Chub-Chub.

It doesn’t happen overnight. Or even in weeks.

It’s not about great leaps forward. It’s about improvements inch-by-inch.

The more you write (or eat in his case), the greater your stature becomes. It’s only through practice that your writing improves.

Everyone goes through it. The inchworm phase. No one is exempt.

Progress is made by working through the basics – to survive and thrive.

Work inch-by-inch, starting from the first word through to the last.

Secure each single sentence then build further. Chase your writing dream, however simple that may be.

Keep pushing until you’re close to the edge – you’ll need courage and belief to get there.

But that’s where things happen.

That’s where your writing will grow, creep and morph …

And become more than.

Has your writing changed?

Has it undergone its own metamorphosis? How did you feed your growth – books, reading, writing?