Are you maker, a user or a destroyer? 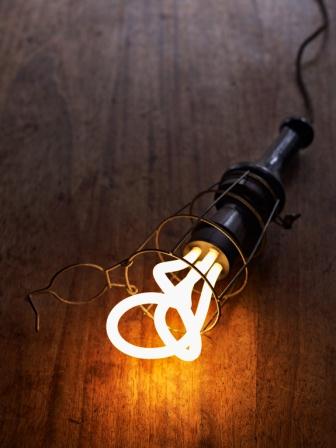 I come from a long line of makers.

My Mum is a brilliant crafter – creating magical dolls, clothes and quilts, knitting and sewing her way through her life; a journey that to this day has yet to stop. My Dad was also a maker, re-user and re-inventor, (a product of his era) and all my sisters are makers in different flavours.

And I must (sheepishly) admit to having so many UFO’s (unfinished objects) squirrelled away in my cupboard that I’m hoping I master the spell to manifest things before I die. Otherwise my kids have got a problem.

So yes, I’m definitely a maker… in fact it’s almost palpable in my blood.

To me creation (in all its shades, variations and guises) is the foundation of life. There is nothing as fulfilling as imbuing something you’ve made, written or inspired with your essence and life spark – however subtly – for another to experience.

So given that, some news from the UK got me to thinking…

Earlier in the year the UK media celebrated the design of a new light bulb – its design was hailed as a marvel.

An aesthetically pleasing design, it combines form with function. It took the drab, boring bulb into new areas; turning it into something to be seen.

The Plumen 001 is now the sexy new look for interior lighting impact and they have added imagination to an item that had otherwise been lacking in any figurative spark.

Designed by Samuel Wilkinson, he playfully re-engineered low-energy light bulbs with two intertwining swirls, and for his efforts he won the overall Design of the Year award.

However, others within the English Design world commiserated the fact that so many wondrous UK designs (including the new bulb) were being manufactured abroad. “Are we a country that ‘makes’ nothing? That’s a major tragedy,” an unnamed source was reported to have lamented.

This reminded me of a favourite scene in one of the all-time great feel-good movies – Pretty Woman. There’s a scene where Julia Roberts’ character asks Richard Geres’ about what he ‘makes.’ The question throws him as he had never considered his world that way.

In turn she finds it very odd (and almost sad) when he says he doesn’t make anything – that instead he buys things and then breaks them up into pieces. He’s in fact a user and destroyer.

Of course by the end of the movie he turns his life upside down (literally) and decides to ‘build things’ …. “We’re going to build ships together” he proudly says to the patriarch of the company that he was about shred into small pieces and sell off.

So this brings me to the question …

What are you – a maker, a user or a destroyer?

What do you create?

Our lifestyle today (well since the 50’s) has been driven by ever expanding options, choice and the growing variety of new things to buy.

Very little is now made. Well, by most people that is. Lost are the handicrafts of old, the notions of creating and enjoying that process are long forgotten and are instead overshadowed by the spectre of the shiny new things you can buy.

Think about Gen Y who is renowned for their obsession with replacing things anew when they falter – rather than repairing or recycling.

What’s happened to the notion of making?

Why has buying become better than making and how has that impacted our values and what we treasure? How has ‘making’ been denigrated and lowered to a level where it is now considered as ‘making do’ rather than being recognised as ‘creating and manifesting?’

I’m in mourning for the making era. I suppose it’s our society to blame – consumer, consume, consume – leaving no space or place for replace, rework, renew, recycle and reinvigorate.

Does that worry you?